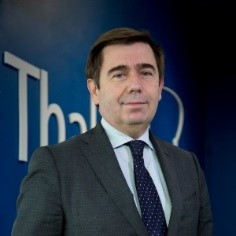 Bio: Massimo Claudio Comparini graduated in Electronic Engineering from the Sapienza University of Rome and in Strategy from the Stanford Graduate School of Business in Palo Alto, California. Comparini began his space-related career in 1983 at Selenia Spazio (later to become Alenia Spazio), holding various managerial positions until becoming Chief Technical Officer. Comparini is today Deputy Chief Executive Officer of Thales Alenia Space, Joint Venture between Thales and Leonardo, focused on the design and construction of space infrastructures in all the space domains, Executive Senior Vice President for Observation, Exploration and Navigation and CEO of TAS Italia. Former CEO of e-GEOS, Joint venture between Telespazio and Italian Space Agency, CTO of Telespazio and of Thales Alenia Space. Author of over 100 publications, in the field of space and microwave technologies, innovation and technology management, he is a member of numerous steering committees and boards of scientific associations and international conferences. Over the years, he has held several academic chairs in the engineering departments of leading Italian universities.

Title: From Pisa to the stars: Story of a space champion (Sitael) within the Italian Space sector

Bio: Marco Molina graduated cum laude in Aeronautical Engineering (1994) from Politecnico di Milano with a thesis on orbits in the Earth-Moon system, he is a PhD in Aerospace Engineering (2007) at the same university. He is currently Managing Director of Sales and Products at Sitael, the largest privately-owned space industry in Italy, part of the Angel group. His commitment, altogether with his company, is to exploit the potential of space-based technology to improve life quality on Earth. He is in the Italian aerospace industry since 1996. In recent years, he worked for Leonardo as Space CTO (Chief Technical Officer) and was previously Deputy Technical Director of Carlo Gavazzi Space (now OHB ITALIA). He has worked on more than ten missions already launched into orbit: satellites, microgravity experiments and experiments on the International Space Station, including the largest orbital fundamental physics experiment: AMS-02, launched in 2011 and currently operational and PRISMA, the first hyperspectral satellite for Earth monitoring launched in 2019. He was the first to demonstrate in weightlessness the use of Graphene for satellite cooling, in 2018. He is involved in the PLATiNO project, the innovative Italian high-tech and all-electric satellite.

Abstract:  How can an University spin-off become a major space player? Sitael is a success story which started, together with others entities wisely merged, from a University of Pisa spin-off nearly 20 years ago. High technology, vision and passion are the drivers which allowed consolidating the business, scaling-up from a start-up to a nearly 300 people firm.
We will review the challenges from a business and a technical point of view to run such a private space activity in Italy, as well as the value of such a player for the Italian space ecosystem.
The Italian Space sector is an example of a practical implementation of the so called “new space economy”, strongly built on several decades of national investments by Italian Space Agency ASI: it is time now to return this investment to the citizens, and the technology is available to do so. Main achievements obtained during this growth at Sitael will be presented, with the scale-up of the complexity of the space projects and the creation of new jobs.
The challenge for the Country is not only economical but cultural, as well: a new generation of space enthusiasts is growing, with high expectations based on the global space economy growth. There are opportunities to have highly specialized resources returning to Italy; furthermore these fresh energies can be funneled to nurture STEM disciplines practice; the continuous link with the education and research entities can transform innovation into products in a sustainable way and through a virtuous spiral. The challenge is open!

Title: The future of Data Handling Systems, an ESA perspective

Bio: Ali Zadeh European Space Agency, ESTEC, The Netherlands Dr. Ali Zadeh received his B.S. and M.S. (1993) from the University of Bergen (Norway) and his Ph.D. in Physics from Brunel University, West London (UK) in 1997. In 1996 Dr. Zadeh joined the European Southern Observatory (Munich, Germany) as a CCD specialist. At the end of 1997 to present he is working at the European Space Agency (ESTEC, The Netherlands). At ESA, he started working as a Radiation Effects engineer supporting numerous ESA missions, later heading the Component Space Evaluation and Radiation Effects Section. Since 2018, as Head of the Data Systems, Microelectronics and Component Technology Division, his responsibilities span Data Handling System, On-Board Computers including on-board interfaces, microelectronics development and active/passive EEE Components flown on ESA missions. Dr. Zadeh has authored and co-authored more than 30 papers.

Abstract: The European Space Agency (ESA) strives for peaceful exploration of the universe and improving life on Earth. For decades, ESA achieves its goals by active involvement across every area of the space sector. Resulting in the development, testing, and operation of over 80 satellites since 1975. Each ESA satellite is unique, comprising of numerous sub-systems operating in unison to achieve mission goals in the harsh space environment. One of the important satellite sub-systems, namely the Data Handling System under Avionics, ensures satellite control, maintains safety and security, provides interface to payload, stores scientific data, and handles communication. The performance and correct operation of a satellite, therefore, depend strongly on the performance of its Data Handling System. The requirements placed on Data Handling Systems, tightly bound to payload performance requirements, platform operational requirements and communication to the ground, increasingly push the limit of space electronics capabilities. This is in particular true for current and future Earth Observation missions. These missions fly state-of-the-art instruments monitoring the Earth through a wide range of electromagnetic wavelengths with unprecedented precision. Such instruments produce large volumes of data to be transferred, processed and downlinked which necessitates challenging technological solutions. In parallel, the need to reduce development time and cost points towards standardisation of spacecraft systems. Exemplified by the newly introduced Advanced Data Handling Architecture (ADHA) facilitating great collaboration between ESA and European Stakeholders. This presentation provides a glimpse into the ESA Data Handling System approach and associated challenges with respect to stringent performance and standardisation requirements. Additionally, coordinated development of microelectronics and EEE Component technologies in support of Data Handling Systems is examined.